A couple of months ago, I went to the JUGL (Java User Group Lausanne), at which they had a comparison between various packages for analyzing quality, including Sonar, Coverity, Jtest, Xdepend and Restructure 101.

I decided to play with some of them and really try them out. So we're starting with Restructure 101.

Please note that I am in no way affiliated with Headway Software.

Restructure 101/Structure 101 is a package which analyzes your code base in terms of complexity, along two axes, which they call FAT and Tangle. A package/jar/whatever is fat if there are lots of classes in it. Your code is tangled if there are loops in your dependency graph, or if there are too many dependencies between packages. For instance, if package a depends on package b which in turn depends on a, you've got a loop. This is considered bad.

So, as a test I'm using a single jar from one of our projects. (Java 1.4, Hibernate 2). Even before I start this, I know it's badly structured and hard to follow, but what's the best way to improve this?

In Restructure 101, you import the jar into a new project and it shows you: 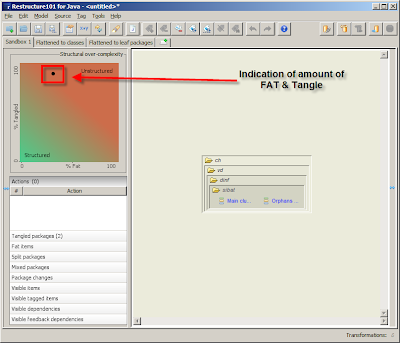 So we can see in the top left, we've got a fairly tangled codebase, but not too fat. (You can adjust the parameters).

By double clicking on a package, you expand it, and you start to see the links between packages. Do we drill down a bit, looking for tangles 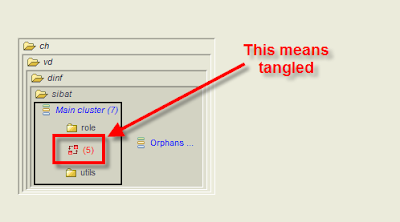 So we look for stuff with a red background. The blue lines indicate the dependencies which cause tangles. After a minute or so, we have the following: 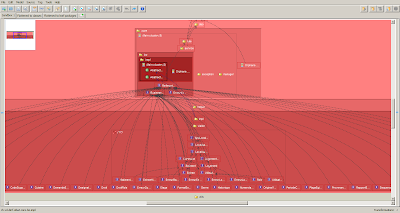 We seem to have found it. So, what does this diagram mean? In fact, we have a package bo, and a sub-package bo.impl, and a corresponding modele and modele.impl. The bo contains the base interfaces and abstract classes and modele the model interfaces and concrete classes. So what can we do about this? Restructure 101 allows us to drag and drop from one package to another. So we'll take the interfaces from bo and put them into modele and the abstract classes from bo.impl to modele.impl. 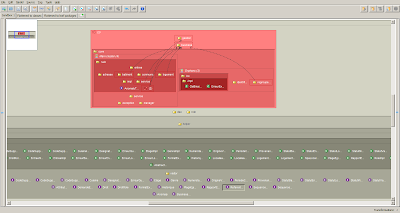 which looks a lot better, and I think is a lot easier to understand. All of my model is in one place now. It's a pretty big package (56 classes), but acceptable because all the classes are the same type of object. When I'm in this package, I don't need to think. This improved clarity of architecture is reflected in the complexity indicator: 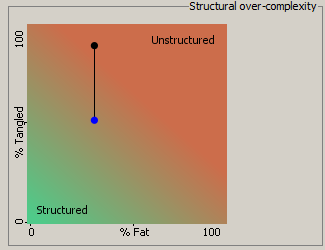 which has moved in the right direction (down). We'll stop there.

This is all very nice, but what can we do with this information? Restructure 101 gives us a number of options. The first and probably most useful is to export the list of actions made in Restructure 101 into the Eclipse plugin. I can't do this because I've only got an evaluation license, so I can't tell you whether or not it works :-). But even without the export, I can go to Eclipse and know what to do.

So, for my test jar, I found Restructure 101 useful, without even going very deep into the functionality. You can do a lot more, including publishing to a repository, for changes to be picked up by the eclipse plugin, and there is a sonar plugin.

Next, I wonder how this will react to a Scala project.
Posted by Matthew Farwell at 12:30 pm 0 comments